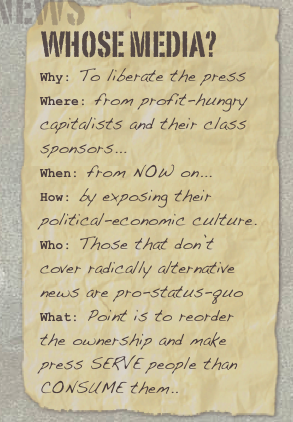 For those of us, who are advocates of Press Freedom, I have something to say. And I am not using my right to free speech, to say this. I am using my sense of deep and prolonged sense of despair at the lack of equal human standards of dignity, to say this.

It is in this sense, that the fundamental means of saying what I have to say becomes more crucial than all the vested “rights” I may have, to say.

As journalists, indeed, we have to reflect the odor of the ghetto and the slums as we smell; the visual acuity of depraved homelessness here there and everywhere as we see; the worn-out rugged rough and the workers class as we feel; to listen to the anger and frustrations of the people long forced to rationalize to live irrational lives; and to have our mouthful of words to express them back to the society. If we fail to carry out the obligations of our senses, we would rather not call ourselves any more representatives of the public than those of the opportunistic politicians, bureaucrats and the members of business class, who live gloriously off majority’s wretched lives.

In an age where Press Freedom seems to be encroached upon by the politicians, by our own definitions and descriptions, journalists for more reasons than one, need to find vehemently supportive voices among the public. Unfortunately most members of the Press today are among the most distrusted. No wonder it is a tough and formidable task, whenever it comes to safeguarding the class interests of journalists in any country.

For example, if the Government in the United States passes a bill restricting journalists to blog about politics alone, how many of the readers are going to take to the streets in protest? Logically speaking, every mainstream media organization has all those “loyal” readers who feel very depressed at the slightest changes made even to the weekday layouts. But how many of them will come out to fight the Government to take the side of the slighted scribes?

This is a time to ponder. To introspect, how have we so far used the freedom granted to journalists, making us more equal among the equals? Have we earned enough respect and admiration from the public whose name we have used to ride the ladders of exclusive freedom? In our pursuits of attaining limitless freedom in accessing public information, twisting them for our own purpose, and winning big prizes and deals from the publishers, a slot on airtime and few positions as expert analysts, how much have we fought for the freedom of the very public that we claim to represent?

It is time also to humbly admit that in the name of elitist objectivity which we have afforded to enjoy, owing to the more powerful lifestyle (if not directly a luxurious one, although exceptions are significant), we have since inception of the media in every culture, only succeeded in evading the actual issues. One of the major issues for us, is definitely not Press Freedom; it is the way we have decided to utilize it so as to enjoy the more-than-thou freedom.

If one of the roles is being representative of the public we seek to serve, how well are we performing it. To this end, we can demand for the unbridled freedom, not just for ourselves (indeed this comes later), but for the peoples. Our roles, far from being informers and entertainers, must be that of active participants in the mutual community building with social justice as the goal. For, if we represent the public, we must do so with selfless endeavor, not just as public relations officers of the ruling government or its branches of police stations, but also as advocates of the peoples’ concerns which need outlets of expression, which need to be heard, and which need to be followed up till the demands are met.

‘Tis time we took a stance, to become the actual freedom fighters. Freedom for the majority of people of this planet. Not some selfish attempt at seeking a daily pass to the White House and feel proud of parroting the administrative voices. But to take the extra effort and the pain associated with exposing ourselves to the harsh realities within which the peoples today survive, and make sure that we are fighting for their freedom of speech as well.